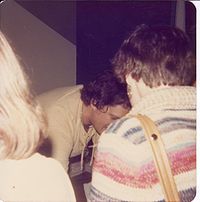 Harry signs autographs after the show.

Harry Chapin performed with the band this night at Millikin University in Decatur, Illinois at the Kirkland Theater on March 9, 1977.[1]

The low-quality photos were taken with a Kodak Instamatic camera.

I got tickets for this show at the last minute in my hometown of Decatur. I was away at school at University of Illinois in Champaign-Urbana and came home that night for the show. The concert hall was half filled. We sat near the back. I remember the crowd being the worst crowd of any I had seen at a Chapin concert. Harry never returned to Decatur. It was another of his two performance gigs. I think I saw both shows but only have the ticket to the 10:00pm show. Marty Acks